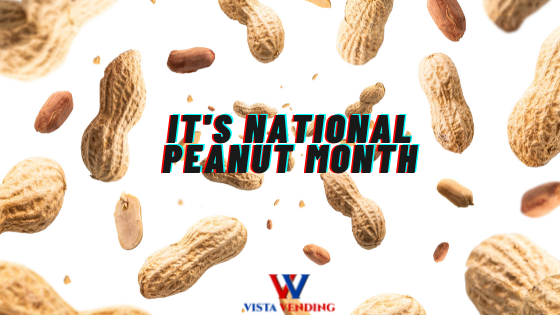 The peanut has a long and celebrated history. It dates back to 1500 B.C., according to the National Peanut Board (NPB), and even has its own national month – March. More than a third of all peanuts grown commercially end up as peanut snacks and candy, like the ones residing in your Seattle, Tacoma, Puget Sound vending machine or micro-market. From peanut butter smothered to chocolate peanut covered, it’s time to celebrate the wonderful peanut.

Snap a pic of your peanuts

Start National Peanut Month off right with your favorite peanut-based snacks. Look for peanuts in your healthy vending machine as part of a trail mix or granola bar. Or treat yourself to a peanut filled candy. A Seattle, Tacoma, Puget Sound vending machine favorite is the Snickers bar which is reported to have 16 peanuts per bar. (Bonus points if you count and post your bar’s number).
Whole peanuts aren’t the only way this tasty, protein packed treat ends up in your vending machine and micro-market food. Peanuts as peanut butter account for a large percentage of tasty treats in your Seattle, Tacoma, and Puget Sound break room. Think everything from peanut butter cookies to peanut-butter filled chocolate cups. That makes peanuts a star of the snack vending machine.

March being National Peanut Month is a perfect time to brush up on your peanut facts. For instance, did you know that the peanut is not actually a nut. The peanut is a legume, like a pea or a lentil. Here are some other fun peanut facts to wow your Seattle, Tacoma, Puget Sound co-workers from the NPB:

Add more peanuts to your diet

Peanuts are nutrient rich. A serving of peanuts has 7 grams of protein, 30 essential vitamins and minerals, as well as being a great source of fiber and good fats. Perhaps it’s time to add peanuts to the snacks at your Seattle, Tacoma, Puget Sound break room with upgraded pantry service. Or try a new recipe starring March’s plant-based protein.

This March, between donning a shamrock hat and celebrating the first day of Spring, rejoice in the availability of one of America’s favorite snacks, the peanut. And if you need more peanut snacks in your Seattle, Tacoma, Puget Sound break room, we have plenty to offer. Contact Vista Vending at (253) 592-2843 today.